Posted at 10:40h in News_en by Giovanna Pascale
Share

The 2019 World Superbike Championship season kicks off on 22 February with round one at Australia’s Phillip Island Circuit; following, new races from Thailand, Spain, The Netherlands, later heading to Italy with Imola and Misano rounds, respectively scheduled on 10-12 May and 21-23 June. Round one will be closing with the Californian Laguna Seca round scheduled on 12-14 July. Round two follows with the competitions in September and October 2019 in Portugal, France and Argentina until the last race on 25-26 October at Losail in the Qatar.

TESISQUARE joins the Cherasco team, directed by Gianni Ramello, for upcoming events scheduled for the 2019 season, sponsoring team vehicles, suits, and hospitality. Dynamism, reliability, innovation and collaboration are the elements that distinguish the two excellences of Made in Italy, which perfectly reflect the spirit of territorial and value belonging. 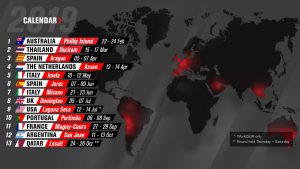 The Go Eleven project stems from the idea of ​​Gianni Ramello. Firstly involved in the World Superbike championship as a BRC Racing sponsor, Go Eleven enters the Superstock 1000 World Cup circuit, appointing Denis Sacchetti, former team driver, team manager in 2010. After ten years of collaboration with Kawasaki, Go Eleven focuses on the Ducati, with the new model Panigale V4R and the engagement of the driver Eugene Laverty.


This website or its third part partly tools use cookies, which are necessary to its functioning and required to achieve the purposes illustrated in the cookie policy. If you want to know more or withdraw your consent to all or some of the cookies, please refer to the cookie policy. By closing this banner, scrolling this page, clicking a link or continuing to browse otherwise, you agree to the use of cookies.Okcookie policy