Posted at 16:03h in News_en by Eleonora Bori
Share

EESPA (European E-Invoicing Service Providers Association) commissioned this fourth annual survey among its members as part of a continuous support of the rapid e-invoicing market growth and to play its part in monitoring. The majority of invoices processed were B2B or B2G invoices (1035 million invoices in total in 2016), although the EESPA membership also has a significant involvement in the delivery of B2C invoices (580 million invoices in total in 2016).

Compared to the years 2014 and 2015, last year has been characterized by an important growth of B2B and B2G transactions as well as for the sector B2C. According to the results emerged by the survey, the volumes are respectively increased of 18% in B2B/B2G market and of 16% in B2C market. As the implementation of EU Directive 2014/55 (that rules B2G e-invoicing in Europe) is in progress, we are expecting a further volumes increase based on the results of the last years. 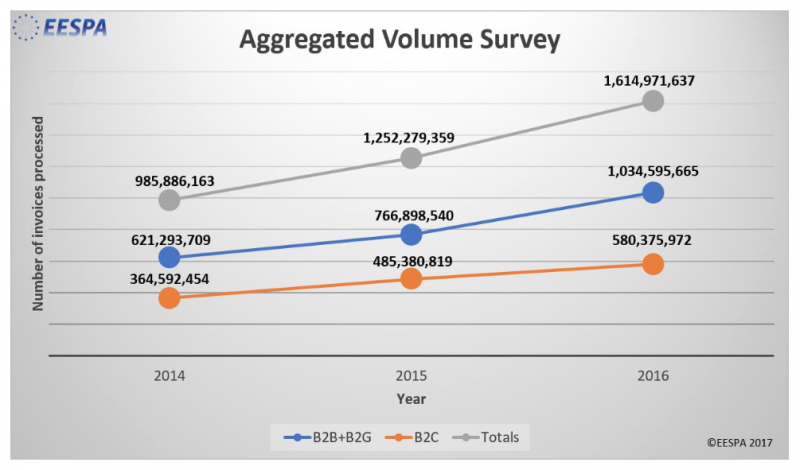 B2G and B2B e-invoicing: focus on the Italian Market

Recently Ernesto Maria Ruffini, Director of Agenzia delle Entrate (Italian Tax Authority), resume the status of Public Administration e-invoice market in Italy: “From June 2014 to August 31st 2017, the SDI (Sistema di Interscambio) has received and managed around 75,5 million invoice files. Around 70,2 million files have been delivered to the Public Administrations and around 2,5 million invoice files have been managed per month; moreover the rate of invoices rejected has been progressively reduced from 18%  in 2014 to 4,16% in August 2017.”

The Italian Government is working to a law proposal to make B2B e-invoicing mandatory, starting from next year. The main goal is to increase the development of the automation and the diffusion of information technology in companies as well as to reduce fiscal evasion:

According to the “Ministero dell’Economia e delle Finanze”, B2B e-invoicing will bring a saving of 3-4 million euros:” B2B e-invoicing is far more cost-effective. It allows measurable saving for each invoice managed in comparison to traditional invoices models and this is not only worth for big companies, but also for the smallest one.”